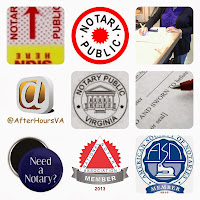 I was sworn in and received my commission as a notary public on August 27, 2012 in Richmond, Virginia.  Since then, I've learned so much about being a notary and quickly realized it's much more than stamping a document.  I would like to say thank you to all of the great people I've met along the way who have given me the privilege of notarizing their most important documents.

The first Notary Public Day was celebrated on November 7, 1975, and was created to “recognize notaries for their public service and their contributions to national and international commerce.”

What is a Notary Public?
The Commonwealth of Virginia Notary Public Handbook defines a notary as a public officer “who acts as an official, unbiased witness to the identity and signature of the person who comes before the notary for a specific purpose. The person may be taking an oath, giving oral or written testimony, or signing or acknowledging his or her signature on a legal document. In each case, the notary attests that certain formalities [as required by law] are observed.”

Why are documents notarized?
There are many reasons you may need to have a document notarized. Documents are notarized to deter fraud and to ensure they are properly executed. An impartial witness (the Notary) identifies signers to verify identity and to make sure they have entered into agreements knowingly and willingly.
Most official documents need to be notarized.

What kind of identification is needed to have a document notarized?
As per Virginia law, all signers must personally appear before the notary and present government issued photo identification. The name on the identification must match the name printed on the document. Acceptable identification documents are as follows:

Does notarization make a document "true" or "legal"?
No. A notarization typically means the signer acknowledged to the Notary that he or she signed the document or "swear or affirm" under oath or affirmation that the contents of the document were true.

Can a Notary refuse to serve people?


A notary may refuse to notarize a signature if he or she is uncertain of an individual’s identity, or if the notary is uncomfortable with the validity of the identification documents.

Need that doc notarized soon? Book with me! https://book.go-suite.com/20914 #GOBOOK